Are the terms of an offer letter enforceable? If the offer is accepted, the answer is usually a resounding “yes,” even if the employment offered is only at-will. See, e.g., Hooker v. Trusted Life Care, Inc., et al., No. 07-0174C, 2009 WL 839094, *6 (Mass. Super. Mar. 11, 2009) (an employer whose offer of employment was signed and accepted had a contractual obligation to allow the employee to begin employment, even if such employment could be terminated immediately).  Needless to say, once employment is begun, protections, such as severance upon termination without cause, are triggered.

Recently, however, another case has been decided which provides a primer on potential pitfalls for executives switching jobs in uncertain times. In Moore v. LGH Medical Group, LLC, No. 1981CV00081 (Mass. Super. March 5, 2021) (“LGH Medical”), a judge of the Massachusetts Superior Court (“Superior Court”) held that some job offers, even if accepted, are not enforceable. In LGH Medical, Dr. Moore received a letter from LGH Medical Group, LLC (“LGH”) offering her a position as Medical Director at Lowell General Hospital. The offer letter was attached to an email, and the email stated (emphasis supplied):

“Upon your signature accepting this offer, we will finalize an employment agreement based on [the offer letter’s financial] terms.”

“This is not a legally binding document, but your signature on this will confirm your acceptance of the financial terms which will prompt us to generate an employment contract.”

Dr. Moore timely accepted the offer, but the employment contract was not forthcoming. Thereafter, Dr. Moore sued LGH on two counts: breach of contract and, in the alternative, under the equitable doctrine of promissory estoppel. LGH moved for summary judgment on both counts.

The Superior Court sided with LGH, putting an end to Dr. Moore’s case prior to trial. Not unsurprisingly, the Superior Court found that the specific intent of the parties was that the offer letter was, itself, not enforceable as a contract. Rather, both its language and the surrounding facts (including admissions by Dr. Moore) “indicate that the parties contemplated the execution of a final written agreement…” It was, effectively, an unenforceable letter of intent.

What was more surprising was the Superior Court’s rejection of Dr. Moore’s promissory estoppel claims, the elements of which are a representation that was intended to induce reliance and that such reliance was reasonable. This claim is akin to a tort claim for fraud in the inducement, although the elements are not identical and it is possible that Dr. Moore may have been more successful under that theory, the damages and remedies may have been more limited. In any case, a crucial question is whether the reliance was reasonable and, in LGH Medical, the Superior Court found it was not.

The Superior Court relied heavily on a statement made by Dr. Moore two days after she accepted the offer. In an email, Dr. Moore said, “I am really hoping that all continues to go smoothly…” Under the circumstance, such “hope” could easily have been related to what would be in the employment contract, e.g., the proposed non-financial terms, not whether or not an employment contract would be forthcoming.

Again, however, the Superior Court relied on Dr. Moore’s own admission under oath that she used the word “hope” to describe her potential employment with LGH – conflating whether an employment contract would be forthcoming with whether it would contain acceptable terms. Consistent with that conflation, the Superior Court held that a hope for employment, even if well-founded, is not sufficient to support a promissory estoppel claim.

What This Means for Transitioning Executives

In these uncertain times, the savvy executive should not take steps in reliance on representations that are not solidly enforceable. Retention of counsel to negotiate terms can be an effective strategy for addressing thorny issues without poisoning the waters. 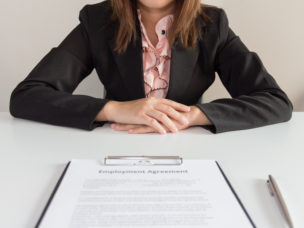